Journal 2 should have been counted as a regular homework assignment, so I’ve jumped to Journal 3, where I started trying to change the anxious, mistake-fearing culture of the class. The text I excerpted from the Pacific Standard was difficult for students to digest, so we spent a good piece of time pulling the meaning out of the text. An editable version of the assignment can be downloaded here: Try Something Journal Prompt 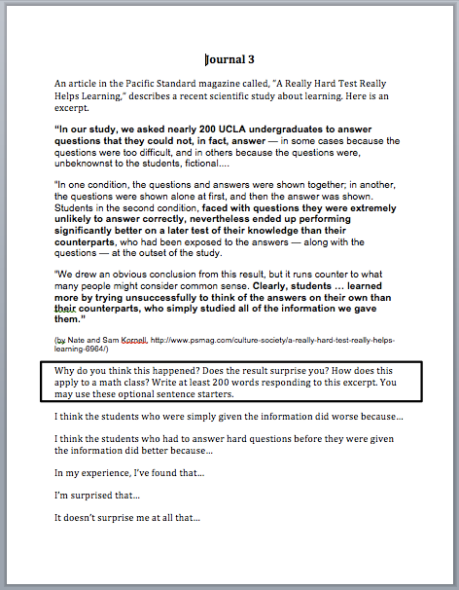 To get kids writing and self-assessing right off the bat, I gave this journal assignment on the first day of class. My collaborating SLP advised the inclusion of the word bank and sentence starters. Download an editable version here: 1 Day One Journal 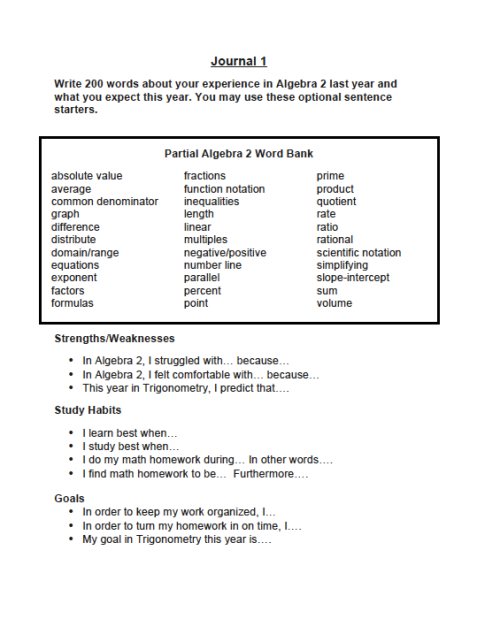 At the end of last year I posted a handful of goals I had for improvement. Here is this year’s version.

I’ve been loving the new things I’m doing this year. I should be posting more often, but hey.

I’ve started a pattern of spending the day after a test, before the tests have been graded, introducing a journal writing prompt for the kids to do for homework. After the test my kids took this week, I played two short clips from Jo Boaler’s video lesson about making mistakes in math class. The first clip described why mistakes are important to learning, how they can create two rounds of brain activity that don’t exist when problems are solved without mistakes. In the second clip Jo gave guidelines for teachers about how to get students to overcome their fear of mistakes. The writing prompt I gave students suggested that they

On average, the journals I received in response to this assignment were less insightful than I’d hoped. But one or two bright spots showed that my work on embracing mistakes as part of the learning process hadn’t been completely lost on the students.

Here are the two clips.

For some reason I can’t get the videos to start at the right point, so navigate to 0:46 on this one to see the bit I showed my class. 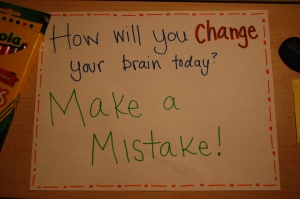 This is another product of the class I’m taking online from Jo Boaler about learning and teaching math.

Even after my vocab-building epiphany, I was inclined to be overly forgiving of slow vocab development. Fortunately my school has speech-language pathologists on staff to collaborate with teachers, and my SLP was quick to direct me toward more exact standards.

For example, one of our favorite vocab-building activities was Math Catchphrase (later dubbed “Mathphrase”). I laminated little cards with mathematical terms on them (some were review words, others were new for current material). Then we played Catchphrase, but instead of reading the word from the disk you pass around, students grabbed their word from a turned-over stack of cards in the middle of the table. On each corner of the table was a piece of paper with the words “Skip Zone,” where students could put the words they had to skip so we could talk about them at the end of the round. After watching us play it once, my SLP saw that the game needed an obvious external incentive for the students to use mathematical descriptions of the words instead non-mathematical ones. So I spruced up the scoring system to reward mathematical descriptions, which made a big difference. Unlike regular Catchphrase, we would reshuffle the words and play again with the same stack for the sake of repetition and reinforcement.

For her end-of-year review, a student came up with her own vocab game (“Draw, Act, or Describe”) that I’m excited to throw into the mix this coming year to prevent overusing Catchphrase.

My Tweets
Differentiated Mathematics
Create a free website or blog at WordPress.com.